For a long time, the [url="https://amzn.to/3zqSfrS",name="Fritzbox 7590",title=""] was something like AVM′s flagship. Accordingly, it can also come up with a particularly extensive set of features. For example, there is the MU-MIMO technology. MU stands for "Multi User". This allows up to four devices to access the Internet via WLAN at the same time. The router distributes data streams depending on demand. In the 5 GHz band, the maximum is 1733 MBit′s, in addition to 800 MBit′s in the 2.4 GHz band.
The equipment also includes an integrated telephone system for IP telephony. In addition, there is a connection for fax machines, DECT, ISDN or analog telephones.The two USB 3.0 ports make it very easy to integrate printers or mass storage devices into the home network.
Moreover, the 7590 comes in a new design and is with up to 300 MBit′s (Supervectoring) perfectly compatible with the Internet of the future.What, however, especially in the Comparison 7530 vs 7590 negative to be noted is the relatively high price. 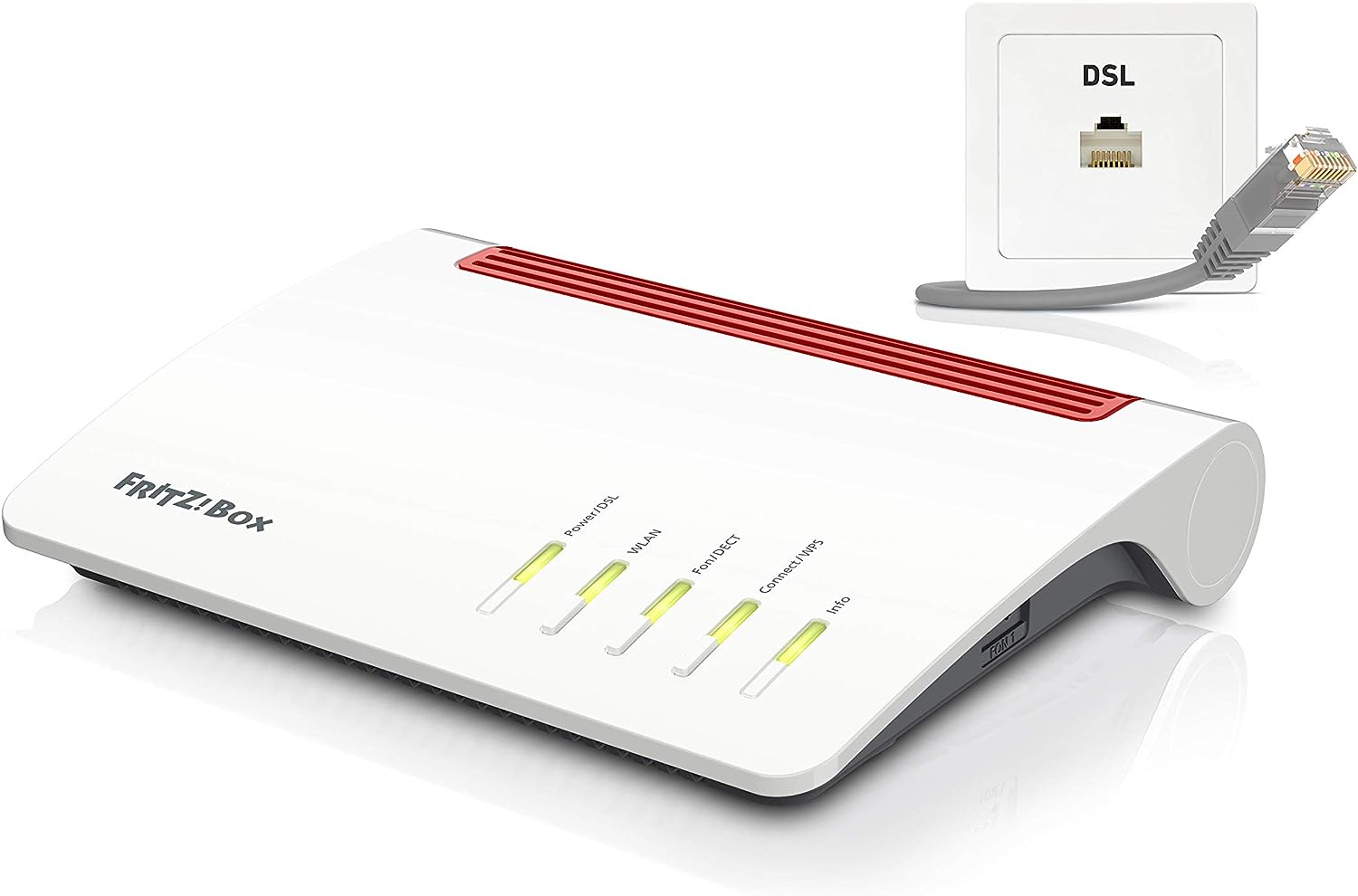 For all those who are looking for a cheaper alternative in view of the high acquisition costs for the Fritzbox 7590, the manufacturer AVM offers its [url="https://amzn.to/3iKCohm",name="Model 7530.",title=""] This also shows compatibility with speeds of up to 300 MBit′s (supervectoring). But it is also compatible with all other DSL speeds such as ADSL, VDSL or Full Vectoring with a maximum of 100 MBit′s without any problems.

Connections and power consumption Fritzbox 7530 vs 7590

In the question Fritzbox 7530 or 7590 it must of course be considered that the [url="https://amzn.to/3iKCohm",name="7530",title=""] also has a less extensive feature set in view of its significantly lower price. However, this is sufficient for many users. A total of four Gigabit LAN ports are available. Of these, one can be set up as a WAN port. 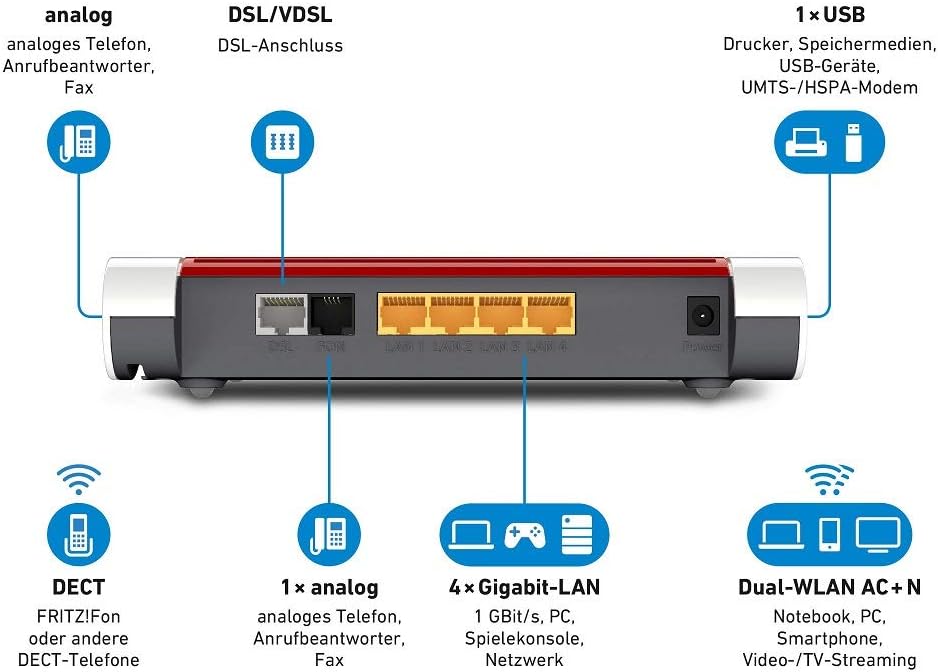 If you turn to the question "Fritzbox 7530 or 7590?" to the USB ports, you can see that the 7530 has a 3.0 USB port. The 7590, on the other hand, has two. The possible uses for such ports are varied: For example, they can be used for a printer or a NAS system. However, it is also possible to connect an HSPA, LTE or UMTS stick. In this way, you can access the Internet via mobile, a method that can be especially interesting for people who often stay in vacation homes or go camping. Moreover, there are also various other situations where a connection via cable is not possible. From the point of view of such people, the 7590 would have a slight edge - as already mentioned, it has two corresponding ports. 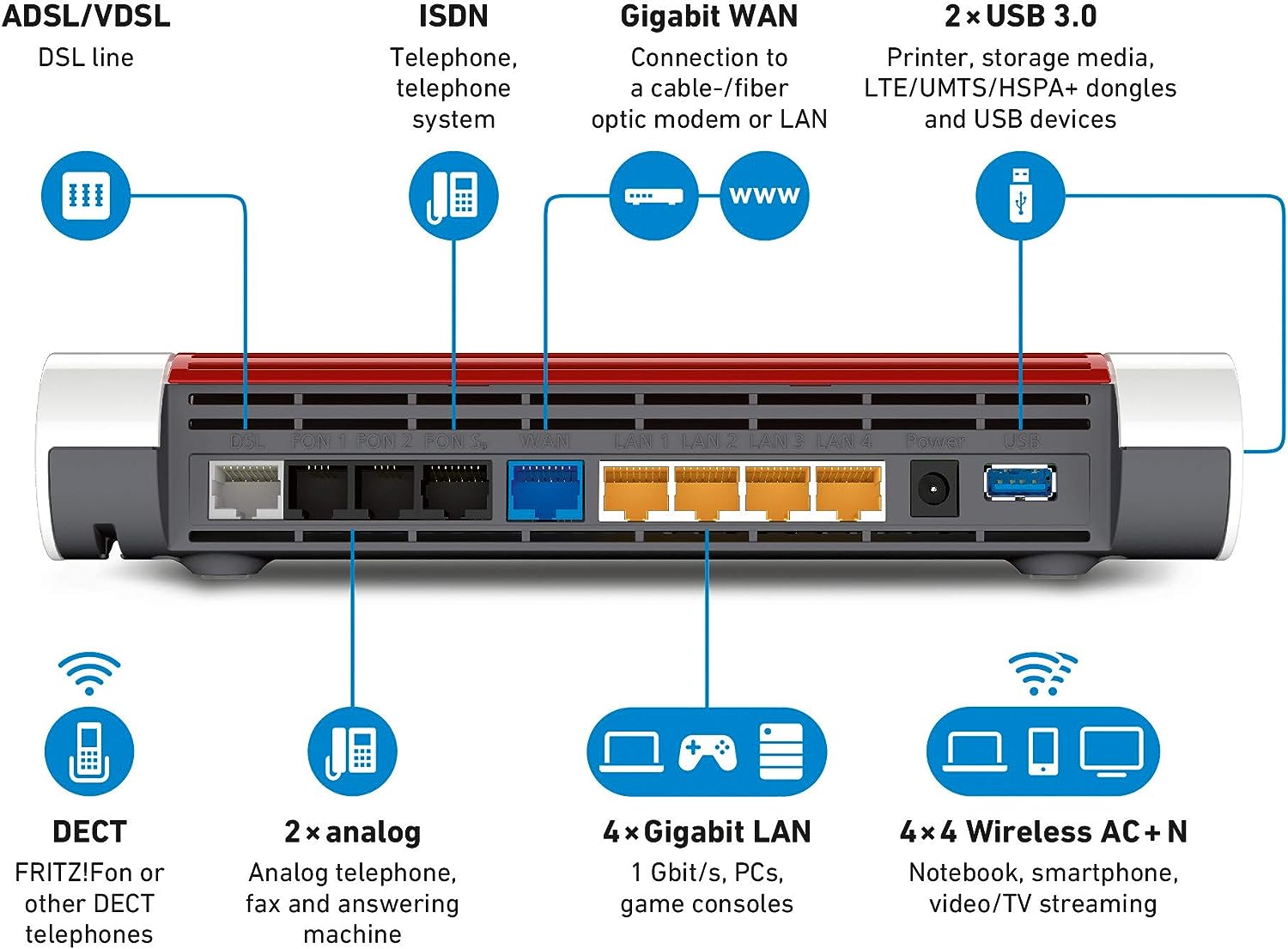 If the question "Fritzbox 7530 or 7590?" comes to the topic of power consumption, the 7530 initially performs better: If it only consumed around 5 watts in various tests, the 7590 consumed around 9 watts. However, the 7530′s lower performance has to be considered here as well.

In this respect, the 7530 vs. 7590 are initially equal - both are equipped with MU-MIMO technology. A speed of up to 400 MBit′s can be achieved in the 2.4 GHz range and up to 866 MBit′s in the 5 GHz range. If you are wondering whether to choose the Fritzbox 7530 or the 7590, you should bear in mind that various tests have shown that the 7530 has a slightly lower WLAN range. However, this is only noticeable in larger apartments and houses. If this is true for the 7530 vs. 7590, it is not a reason to exclude the 7530. The range of the WLAN signal can be increased with an access point or repeater.

If you look at the hardware, you will also find differences, which are mainly caused by the included cables for the different ports.

Thus, the following things belong to the hardware of the 7530:

Those who use this difference to answer the question "Fritzbox 7530 or 7590?" should keep in mind that it is also due to the different performance scopes of the two models. End customers get a five-year warranty on both devices from the manufacturer AVM.

As already mentioned, one result of the 7530 vs. 7590 test is that the 7530 has a lower performance range. This logically justifies the lower price. Nevertheless, this device also has a lot to offer. According to our experience, the functions that the 7530 has are completely sufficient for most users.[asin="B07GX5SWV3",type="standard"]The 7590 is considerably more expensive. However, this can be said to be justified in view of its enormous range of features. Customers have to invest a lot here, but they also get a lot in return.[asin="B071W8R4PS",type="standard"]Regarding the question "Fritzbox 7530 or 7590?" it can be said that you can be completely satisfied with both models in terms of the price/performance ratio.

With regard to 7530 vs. 7590, we should also look at how customers who have already bought this product rate it. The reviews that were submitted via the online retailer Amazon should serve as a source for this. Within its rating system, a total of five stars can be awarded, with five being the best possible rating and one the worst.

Amazon reviews of the Fritzbox 7530:

Amazon reviews of the Fritzbox 7590:

20,135 reviewsAll in all, these numbers clearly speak in favor of the 7590 at first glance, because although there are many more reviews in this regard, significantly more of them are very positive in percentage. Presumably, the comparatively small amount of features of the 7530 was not enough for many customers. However, there is also one thing to consider: Based on these numbers, it is not possible to say whether parts of the customers who opted for the more expensive model and were satisfied with it would not have been satisfied with the less expensive one.

Previous routers used the WLAN ac standard (Wi-Fi 5), which has been common since 2013. Wi-Fi 6 (introduced in 2019) is now supposed to bring more speed in the close range and reduce network problems caused by many devices in a network. In numbers, WLAN ax can deliver up to 11 Gbit/s, while WLAN ac only delivers 1.3 Gbit/s.
So much for the theory - in practice, the benefits of the new transfer rates are mostly limited by the network provider′s transfer rates. This means that even if you have booked a very high transmission rate of 500 Mbit/s, you will not be able to exhaust the possible 11 Gbit/s for a long time. It is also important that your end devices support the standard. However, new smartphones with current processors usually do.

Basically, when comparing [url="https://amzn.to/3iKCohm",name="7530",title=""] vs. [url="https://amzn.to/3zqSfrS",name=" 7590",title=""] the Fritzbox 7530 is always the one where customers get significantly less. In return, however, they also have to pay significantly less, which inevitably leads to the question: "Isn′t the smaller feature set of the 7530 also sufficient?" If you want to access the WLAN network with only a few terminals and also don′t need an S0 connection for ISDN devices, this question can be answered with "yes". Especially smaller households Fritzbox 7530 or 7590?" can therefore usually confidently opt for the 7530 decide.

For all those who higher requirements in terms of WLAN range and connections have, it is worthwhile to buy the 7590 to buy. The probability of missing any functions in the coming years is very low, which in turn justifies the high price in terms of a "sustainable purchase". In case of a corresponding need, this money is thus excellently invested.
Fritzbox
Router
AVM
WIFI
Author:  1
« more
content_copy
keyboard_arrow_down