In this article, we compare the popular Kärcher K4 vs. K5 vs. K7 pressure washers.

Kärcher - The top dog in the field of high-pressure cleaners 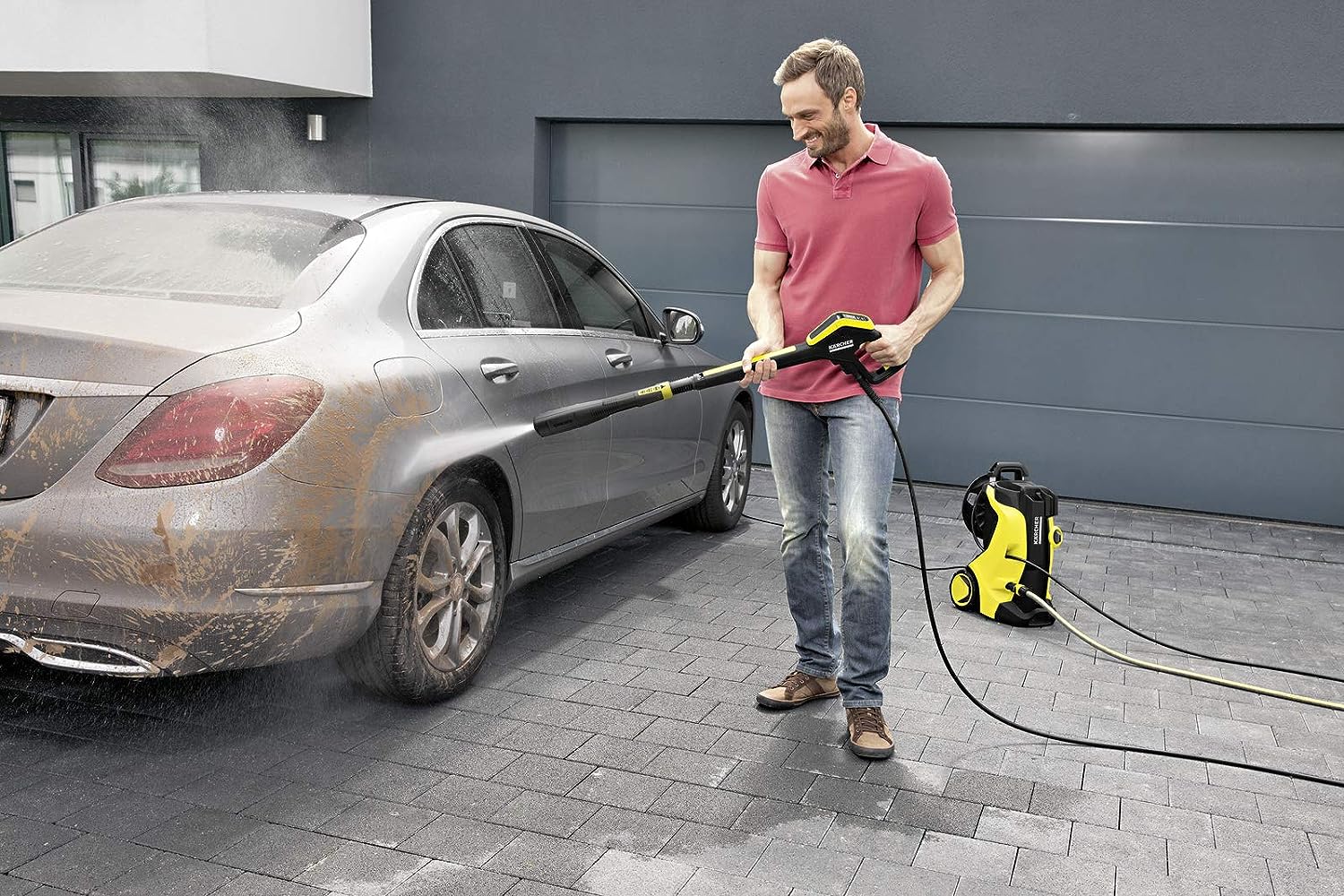 In the segment of high-pressure cleaners, water pressure is understood as the pressure with which the water flows out of the respective Kärcher. The higher this is, the more intensive the corresponding cleaning. Because larger devices can usually build up more pressure, the cleaning process with them is also noticeably more effective. A difference that can also be observed with the Kärcher K4 vs. K5 or Kärcher K5 vs. K7.

As far as the lowest possible pressure is concerned, on the other hand, no differences exist. People who mainly want to work with low pressures will consequently get their money′s worth equally with Kärcher K4 vs. K5 or Kärcher K5 vs. K7 regarding each model. Some objects can be damaged by too high water pressure during cleaning. This can, for example, affect the paint on a vehicle (especially older models with existing paint damage). The physical unit bar is used to quantify the pressure.

The minimum pressure for both the K5 and the K7 is 20 bar. On the other hand, the maximum water pressure of 145 bar for the K5 is 35 bar lower than that of 180 bar for the K7. Expressed as a percentage, this means that the K5 is about 19% less powerful and the K7 about 24% more powerful in this respect.

This is the amount of water that flows out of the unit within a certain time. This is indicated in liters per hour. Kärcher K4 vs. K5 and Kärcher K5 vs. K7 also differ in this respect.

The K4 can pump 420 liters of water per hour, the K5 500 liters. Consequently, the difference is 80 liters. Expressed as a percentage, the K4 pumps 16% less water and the K5 approximately 19% more.

Size of the application area

Basically, the larger the model, the larger the area that can be cleaned within a certain period of time. The respective area is specified in square meters and the time in hours. The decisive question is therefore: How many square meters of surface can the corresponding device clean during one hour? With regard to the comparison Kärcher K4 vs. K5 or Kärcher K5 vs. K7, differences also become clear with regard to this characteristic. In order for potential customers to be able to answer the question of which model is the right one given their individual needs, they should also consider the size of the surfaces that need to be cleaned. If these are rather small, a rather small device that is also less expensive is often sufficient.

The weight also has an effect, the higher it is, to the detriment of handling. However, it is always true for Kärcher K4 vs. K5 or Kärcher K5 vs. K7 that with stronger performance, the respective weight also increases.

Although in terms of these two models, the dimensions are the same, but they differ in terms of weight. K4 weighs 11.8 kg, whereas K5 weighs 17.7 kg. Consequently, the difference is 5.9 kg. This makes K4 about 33% lighter and K5 50% heavier.

In line with the different dimensions, this also results in different weights. K5 weighs 17.7 kg, while K7 weighs 19.1 kg. Consequently, the difference is 1.4 kg. This makes K5 about 7% lighter and K7 about 8% heavier.

Thus, while the dimensions of the K4 vs. K5 are the same but the weight differences are considerable, the K5 vs. K7 show different dimensions but only relatively minor differences in terms of weights.

Potential customers should always carefully consider which objects they intend to clean with their product. When comparing the Kärcher K4 vs. K5 or Kärcher K5 vs. K7, various differences come to light with regard to the question for which applications the respective device is suitable.

You can buy all three models both without and with different accessories. Whether and if so, which items are additionally selected, naturally also affects the price. The prices listed below are as of July 2021 and exclusively refer to new products.

In this respect, there are no differences between the three models. They are all powered by the stone cleaner (3-in-1).

With increasing power, the power requirement of a corresponding device also increases. For example, the K5 consumes 2,100 watts and the K7 3,000 watts. The difference is therefore 900 watts. Due to the difference in performance, the K5 requires 30% less power and the K7 about 43% more.

Conclusion for comparison Kärcher K4 vs. K5 vs. K7

The performance of the respective model also increases with the price. However, the price differences are relatively high. Potential customers should therefore consider in advance exactly what requirements a corresponding device has to meet in their case. If these are comparatively low, a rather inexpensive model is often completely sufficient. The same also applies to accessories.